We are really pleased to share that we have been announced as one of the 7 winners in the Good Jobs and Inclusive Entrepreneurship category at this year’s MIT SOLVE finals.

MIT SOLVE is an initiative of the Massachusetts Institute of Technology (MIT) with a mission to solve world challenges. Through open innovation Global Challenges, SOLVE finds high-potential tech-based social entrepreneurs all around the world.

Solver teams participate in a nine-month program that connects them to the resources they need to scale, such as funding and mentorship. To date, SOLVE has facilitated more than 175 and over $14 million in funding commitments to Solver teams and entrepreneurs. 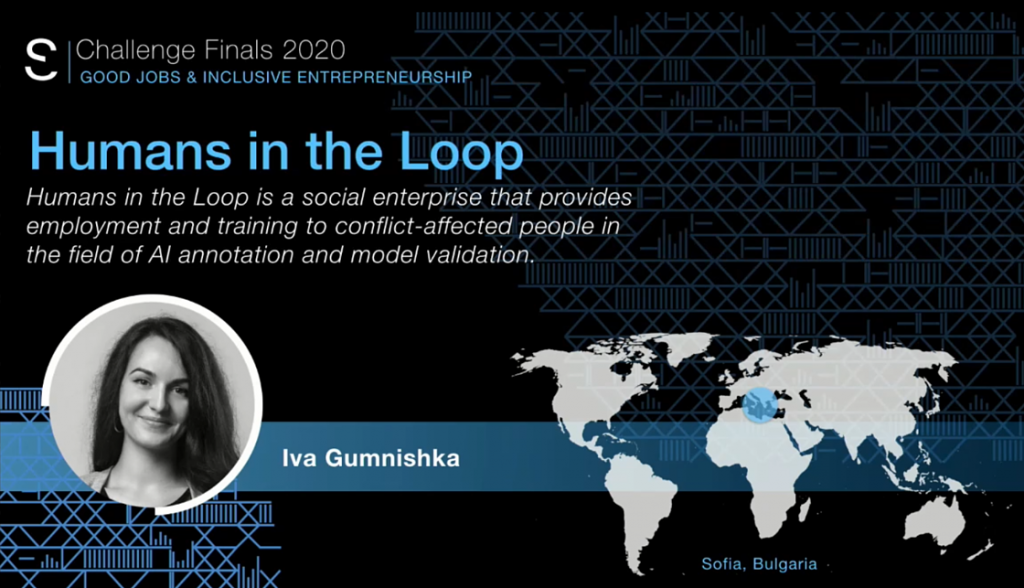 Humans in the Loop is one of 35 winning teams from the 2020 cohort which were selected by Solve’s expert judges from 2,600 applications from 135 countries. For the Good Jobs and Inclusive Entrepreneurship Global Challenge, there were 705 applications received and only 7 winning teams, which means the success rate was almost 1%!

The results were announced at Solve’s annual social impact pitch event which this year took the form of a virtual live stream on our third birthday on 29 September. The event featured guest speakers such as Sal Khan, the Founder of Khan Academy, as well as artist and activist Madame Gandhi.

In addition to being named a Solver team and receiving $10,000 in prize money from MIT Solve, Humans in the Loop beat off stiff competition to win the Andan Prize for Innovation in Refugee Inclusion and the The Gulbenkian Award for Adult Literacy, to a total value of $50,000.

What this means for us

“We are extremely excited to receive this recognition, and to have this opportunity to access the mentorship and support that we need to scale our impact,” said Iva Gumnishka, Founder and CEO of the organization.

“This gives us a huge boost towards achieving our goal of employing 3000 conflict-affected people (refugees, asylum-seekers, and internally displaced people) over the next five years.”

To date, we have employed more than 300 people, 64% of whom are women, and we are looking forward to scaling our reach tenfold and establishing our position as one of the leading impact sourcing providers in the field of AI annotation and validation services.

If you are interested in learning more or collaborating with us, get in touch.